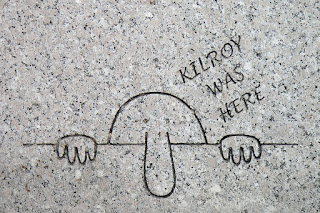 
During World War II the ubiquitous Kilroy popped up on German walls, shelled-out tanks, latrines, tents, ships, and assorted other places, but in spite of his popularity with American soldiers, few people knew who the original Kilroy was. (You can find the story on several Internet sites.)

Although most of won’t find our names scribbled on bathroom walls and sides of railroad cars, our names are important. They are part of who we are. They identify us. We pass them down; we shelve them, change them. We labor over what to name a child, a pet, or even a car.

Whether we love them or hate them, our name is one of the first things anyone learns about us. (Personally, I always liked the strong sound of my name, Marcia, with its link to Mars, the god of war. Plus, my mother spelled it with a CIA, which I thought appropriately reflected my love for information. But as a child, someone nicknamed me Butch. I think it was because my mother had to chop my hair off when I got it caught in the wheels of a wind-up car I held up to my ear. I’m glad that name didn’t stick.)

When writing your story, think about the names of the people in your life as well as your own name. You might find some fun fodder to write about. Consider how you feel about your own name, or the story behind a nickname, or the family history of someone’s name.

Here’s what three class participants had to say about their names:

a. My name Jane is a gem and a lump of coal. At first I relished it. Imagine going to school to discover Dick and his sister Jane romping through their golden life. I was thrilled. Nobody in my class of Debbies and Kathies had my name but all read it every day. And I could spell and write it while my friend struggled with all the letters of Christine.

I am the oldest of five and it was just a matter of time before I noticed my siblings had names like George Alexander and Elizabeth Marjorie. Jane Anne? Could my name be less glamorous? And what about this Jane Doe I read about in the news. She was usually dead.

Then there was the gossip about the Plain Jane neighbor and total confusion about Calamity Jane, the Jane following Tarzan around the jungle and the doomed fates of Lady Jane Grey. The evidence was mounting. The name Jane was an insult, which nicely fed my seething puberty.

The shiny fifties of crinolines and black patent shoes were collapsing into jeans and beads but the gifts of my name started to come in. Everyone wanted to smoke Mary Jane, Jane Fonda was strong and GI Jane was no longer just a nurse.

I’ve grown into my name and made Jane my own. Funny, my short name reflects my ‘get to the point’ nature. Not sure which came first.

b. Arcada inherited an old family name—“its meaning no genealogist has ever unearthed.”

An Arcada surfaced every generation, the first in 1640. The poor child was christened “Arcada Hazzard” as if portending the burden that identically named ladies would later carry. Down through the ages and even in the fairest broods featured in early daguerreotypes, the one dark and somber Arcada stood out among her siblings. For some reason, the family felt compelled to bestow this name as routinely as it willed its engraved silverware.

The name’s nearly 400-year run has ended with me. With no female heir to tag with the dubious label, my husband and I, with a respectful nod to all the ghosts of Arcadas past, laid this dutiful legacy to its final rest.

c.  Although many people inherit family names, this woman discovered hers came from a different inspiration:

Throughout my childhood, I made repeated attempts to give significance to the name my parents chose for me, their first child: Jean Marie. At first, I assumed I had been named after my Aunt Jean, but I was told no. That revelation was okay with me because none of us kids liked her very much and we certainly weren’t close to her.

(Later) Mom explained that she often went to a local butcher shop for meats. When the owner of the shop was particularly busy and needed help, he would call his daughter from the back of the shop. Her name was Jean and Mom liked the sound of the name. I was named after the butcher’s daughter.

d. In her collection of personal essays, This is the Story of a Happy Marriage, Ann Patchett writes about discovering something she never knew about her grandmother:

My grandmother was a good scrabble player, and a patient one. She would play with me after school when I was ten and eleven and twelve. I was a bad speller and she was always working to improve my skills.

She thought about it for a minute. “I don’t like the word drain,” she said. “How many points?” Scrabble was, after all, a lesson in simple arithmetic as well.

“Why don’t you like drains, “I asked, though I was already picturing things clogged in the sink, toothpaste and hair.

Children have a real failure of imagination when it comes to thinking of the adults in their lives as having done anything of interest, anything at all, in the time known as before.

If you are a fiction writer, you consider the sound as well as the meaning of your character’s name: Sherlock Holmes sounds like an official, steady, thoughtful sort of man. But if you’re writing nonfiction, you don’t get to make up names (well, unless you’ve changed them for a particular reason). In either case, here are a few points to consider:

1. Be consistent when referring to someone. Don’t call him Bob one minute and Mr. Moston or Robert the next unless you have clearly identified him as such.

2. Don’t introduce too many names in the same paragraph. You know your characters, but if your readers haven’t had a chance to picture a person in their minds, they will get confused and have to stop and re-read the passage to sort everyone out.

3. If several people have the same sounding names—each beginning with the same letter or having the same number of syllables as in Bob, Ben, Bub, try to space them out or use alternate nicknames or formal names.

1. Look up the meaning and etymology of your name. Check all the names you’ve gone by. You may want to check a few sites—some have different information. Write about your name. How does or doesn’t your name fit your character? How it has influenced you or impacted you through your years?

2. Write about your or someone else's nickname. Where did it come from?

3. Write about a family name. Are there any stories attached? This would be a way to give your passages about ancestors a little more character.

4. Write about a name you chose for someone or something--pet, boat. .  . Why did you choose it?

Hope you have fun with these and are discovering hidden treasures in spite of the darkness passing by,

Love to hear from you