The Pillar of Creation 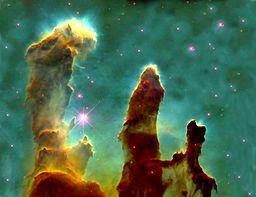 They are called the Pillars of Creation, these spectacular gas formations so far away that by the time their light reaches us, they are thousands of years older. (Or maybe not even there at all.)

Pictures from the Herschel Space Observatory must drive the most obstinate atheist crazy with wonder.

One of the pillars is reportedly four light years tall. How tall is that? Try this from the NASA Glenn Learning site:
"The light-year is a measure of distance, not time. It is the total distance that a beam of light, moving in a straight line, travels in one year. To obtain an idea of the size of a light-year, take the circumference of the earth (24,900 miles), lay it out in a straight line, multiply the length of the line by 7.5 (the corresponding distance is one light-second), then place 31.6 million similar lines end to end. The resulting distance is almost 6 trillion (6,000,000,000,000) miles!"--That's one light year!

The other night as my husband and I watched a show on these and other breath-taking marvels—like the planet, Wasp 12b, whose clouds are filled with corundum, the stuff of sapphires (imagine a world where it rains sapphires!)—I  wondered why God would create such magnificent, word-defying, incomprehensible beauty that no one gets to see.

Well, he certainly does, and maybe once he let his God-creativity loose, he just couldn't help but make mind-boggling beauty. And maybe, we will get to see it all one day. I have to confess that I've taken biblical references to "foundations of sapphires, and "streets of gold" rather metaphorically, but I'm beginning to realize that if the Hubble telescope's sojourn through space is giving us such God-awe-inspiring glimpses of majesty, how unimaginable, how incomprehensible is the beauty of his presence and place that he tells us our eyes have not seen, ears have not heard and minds can not imagine!

But lest I stay worshiping him out in the marvels of the universe, this same Creator, transcends light-year time travel and meets me in my early morning devotion with one of my favorite reminders of how much he cares about even one:

John 20
Mary gets up early and goes in the dark—by herself—to the tomb where Jesus was. What did she expect to see? Probably not an empty tomb. After she runs to get the other disciples and they discover the cloths lying there sans body, they go home. But Mary waits, and when she looks in the tomb, she sees angels. And then, a man, who when he speaks her name, "Mary," she recognizes as Jesus.

A few minutes earlier she had run to tell Peter that Jesus was taken away, gone. Now she runs to tell him, "I have seen the Lord." What a difference a moment makes.

Why Mary? Why did she see angels and Jesus but Peter and John didn't?

I don't know, but it touches me deep. And I pause to marvel that the One who made those stunning Pillars of Creation didn't hide himself out there, unseen, unknown, but met a young woman outside the cave that was supposed to trap him, and called her by name. Just as he calls me by mine—and you by yours.

How marvelous is that.

Blessings abundant, friends. Thank you for stopping by. I pray this year, this April, he will meet you at that place where you are hoping to find him, where you are seeking comfort in knowing that he is indeed not gone, but very present with you.

Sometimes it’s hard for me to imagine some of the Bible stories. I have no trouble with a world-wide flood and a man loading an ark with a bunch of animals, but for some reason the account in Judges about Samson catching three hundred foxes and tying their tails together and lighting them with firebrands, well, I just have to take it on faith.

You just don’t see that kind of thing today.

And then there’s the story about David holed up in a cave and having a peculiar desire for water from a well near Bethlehem, which was occupied by Philistines. When three of his mighty men heard this indulgent muse from their king, they risked their lives to break through enemy lines and bring him his desire.

When I read this the first time, I anticipated the story to continue along the line of David’s profuse thanks and reward, but wait—instead, he poured the precious gift out on the ground before the LORD!

I know this speaks of loyalty and really honoring the risk the men took. It also speaks of offering these precious gifts to God.

The other Sunday, one man in our church felt that the Lord told him to give some money to another man, who, it was known, was in a situation of need. The first man obeyed and gave the second a bill, and then watched, astounded, as he put the money in the offering box.

“I gave that money to you,” the giver said.

“Yes, and now I have something to give the Lord,” the recipient replied.

Right before my eyes, I saw David pouring out his precious drink gift.

May I hold the gifts in my hand so loosely.