“Follow the Science”—Straight to Hidden Wonders and Buried Treasures

I don’t mean the kind of pirate treasures you’d like to find buried in your backyard, but the kind that God has hidden deep in the earth, and under the sea, in the unreachable vastness of the universe, and in unexplored tropical jungles.

When I get to heaven, I’d love the Lord to give me a tour of the mysteries of the universe, because ever since I got my first Wonder book of astronomy in grade school, I’ve wondered why God put such splendor in places that mankind may never see.

Did he put these marvels there in all their hidden glory simply for his pleasure? Or did he put these treasures of creation in unseen places for us to discover, because curiosity and exploration is in our DNA.

Marvels like flowers that bloom once in their lifetime, or ones that bloom in the dark of night that unless you happen upon at the exact moment, you would never see. Or the recently discovered orchids that “sing” and attract birds—“hummingbirds” no less—high up in the Peruvian canopy. Or the multi-colored, swirling nebulae and mysteries of space, some glimpsed through the mighty Hubble telescope, some imagined to be there. Diamonds, rubies, and other precious gems buried deep in the bowels of the earth.

Fixated on this “hidden treasures” theme, I suggested to my husband that we visit a nearby town that had a rock and gem museum. 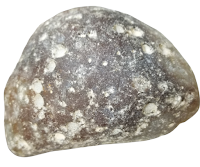 There were rocks you could buy and crack open, potentially exposing spectacular crystal formations. I wanted one of these geodes as a vivid illustration of something that appears ordinary, ugly even, on the outside--something you might pass by without giving it a glance, unaware of the stunning treasure encased inside.

The museum was closed, but there were two rock and gem stores in town. Interestingly, one featured gems and stones from a mystic worldview with wiccan literature, the other from a Christian worldview with creation and God focused literature. That’s what it boils down to, isn’t—humanistic or God oriented viewpoints.

“Follow the science.” A currently popular phrase touted in an attempt to give credibility to man’s thinking. But if you truly follow the science, you might end up where Darwin admitted he was on occasion--perplexed about how natural selection could explain some of the complex structures he found in the flora and fauna.

Because if you follow the science, you might follow it straight into the heart of wonder—straight to the Creator of all that glory. I think that’s why the Lord created the mysterious and marvelous—to lead us to worship—that we “would know that [he is] God.”

And although he is the author of “science," sometimes “the way of God will not be explained. It is [simply] for us to marvel.” (Walter Brueggemann)

I hope you find something to marvel about this week--whether it’s in a fleeting, flaming sunrise, a lone spring flower poking through the snow, or a newborn’s finger wrapped around your own.

And this thought—although it doesn’t fit the point of the above—keeps coming to mind. Maybe someone needs to be encouraged that no less marvelous than those hidden treasures of the universe is the kind act or word you did for someone that no one else saw or recognized. Or the  soldier or loved one who died alone in a foreign land—the one whose sacrifice no one saw. No one except God.

I find great consolation in knowing the Creator of extravagant wonders no human may ever see, is the same one who sees every lone offering of our lives.

“ . .  . that their hearts may be encouraged, being knit together in love, to reach all the riches of full assurance of understanding and the knowledge of God’s mystery, which is Christ, in whom are hidden all the treasures of wisdom and knowledge” (Col 2:2-3).

Email ThisBlogThis!Share to TwitterShare to FacebookShare to Pinterest
Labels: Follow the science, geodes, hidden wonders, the heart of worship

Love to hear from you