Tribute to a Mayan named Mario 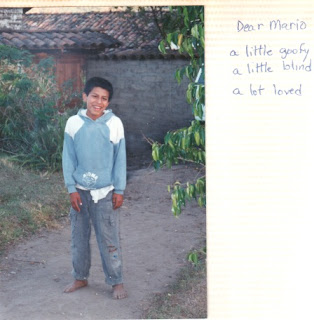 The notation on the yellowing page in my Guatemala photo album reads: Dear Mario—a little goofy, a little blind, a lot loved. Mario (go figure a Mayan boy with the name Mario) latched onto us when we first arrived in his village in Guatemala many years ago.

Although he didn’t understand English, he always seemed to know when Bob was goofing and making up silly words. Mario stuck close to our daughter’s side and served as her protector when she went about the village or the home for orphans. My last memory of him as a boy was when he held the gate open for us, tears streaming down his face, as we drove out of the highland village of San Andres Sajcabaja for what we thought was the last time. 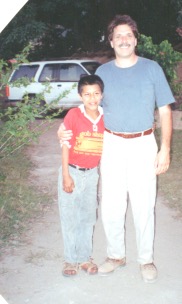 Last week Mario died in a bus accident in Quiche.

He never knew I wrote about him about in a book. Never knew how his picture hung on the walls of three of our houses for the last 20 years. And never knew how God used him to shower me with assurances of love at a low moment.

Those of you who’ve read my book know this story, but I’m going to tell it again. Just because it’s a good one, and I want to give tribute one last time.

Eight years after we left San Andres to return to the States, I was able to take a mission team from our VT church back to Guatemala. This was a dream come true, and I couldn’t wait to find some of the widows and orphans we had come to love during the few months we lived in the village. I packed gifts and pictures for some of the especially dear people, (Mario being one) who I hoped we’d get to see again after all those years. 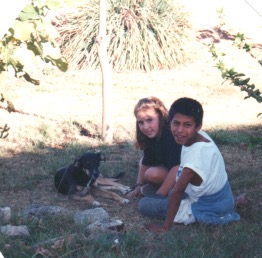 Dena, our friend and missionary connection had been able to arrange a visit with one widow and her girls but had been unable to track down Mario. Disappointed, I packed the gifts I’d brought for him back in the trunks. The day we were leaving I was sick as the proverbial dog. I stayed in my bunk while the team took trunks out to the bus which I heard pull into the yard.

Bob came running in to my room, grinning from ear to ear. “Guess who’s the ayundante (the one who hangs out the door and tells the driver how much room they have) on the bus!” I could tell by the gleam in his eye that it was our Mario.

Now a young man, Mario looked great. He had boots on feet that used to be barefoot. A nice shirt and a job. I braved climbing on top of the chicken bus to find the trunk with his gifts, one of which was a picture of our daughter, herself now a young woman. Mario propped the photo on the dashboard of the bus. I saw him staring at it several times as we careened down the mountain. I wished I knew what memories were rolling through his mind.

The beauty of the story is this: Turns out Mario wasn’t the regular ayudante for that bus company, but was called in the last minute because the regular one had gotten drunk the night before and not shown up.

God had given me my heart’s desire in the way He does best—unexpected.

I treated Mario to a boat ride to an island village we were visiting for the team tourist day. My Spanish wasn’t good, and I have no idea if Mario understood half of what I was trying to tell him, but I hope my grin and joy were evident. 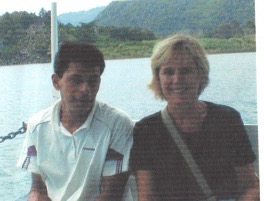 I imagine a mound of flowers and a cross marks the spot where Mario and the others with him died that day. I hope he knew how he helped us bridge that chasm of cultures—how his simple companionship gave us a place to anchor an emotional bond. I hope he knew the love that compelled us to go to his village in the first place.

And I hope I remember the intersections that I have with others—brief as they may be—are opportunities given by God.

We may never know the impact we’ve had on another, but that doesn’t mean it didn’t happen.

May your intersections this day be covered with grace.