The toad in the basement, the sun in the sky 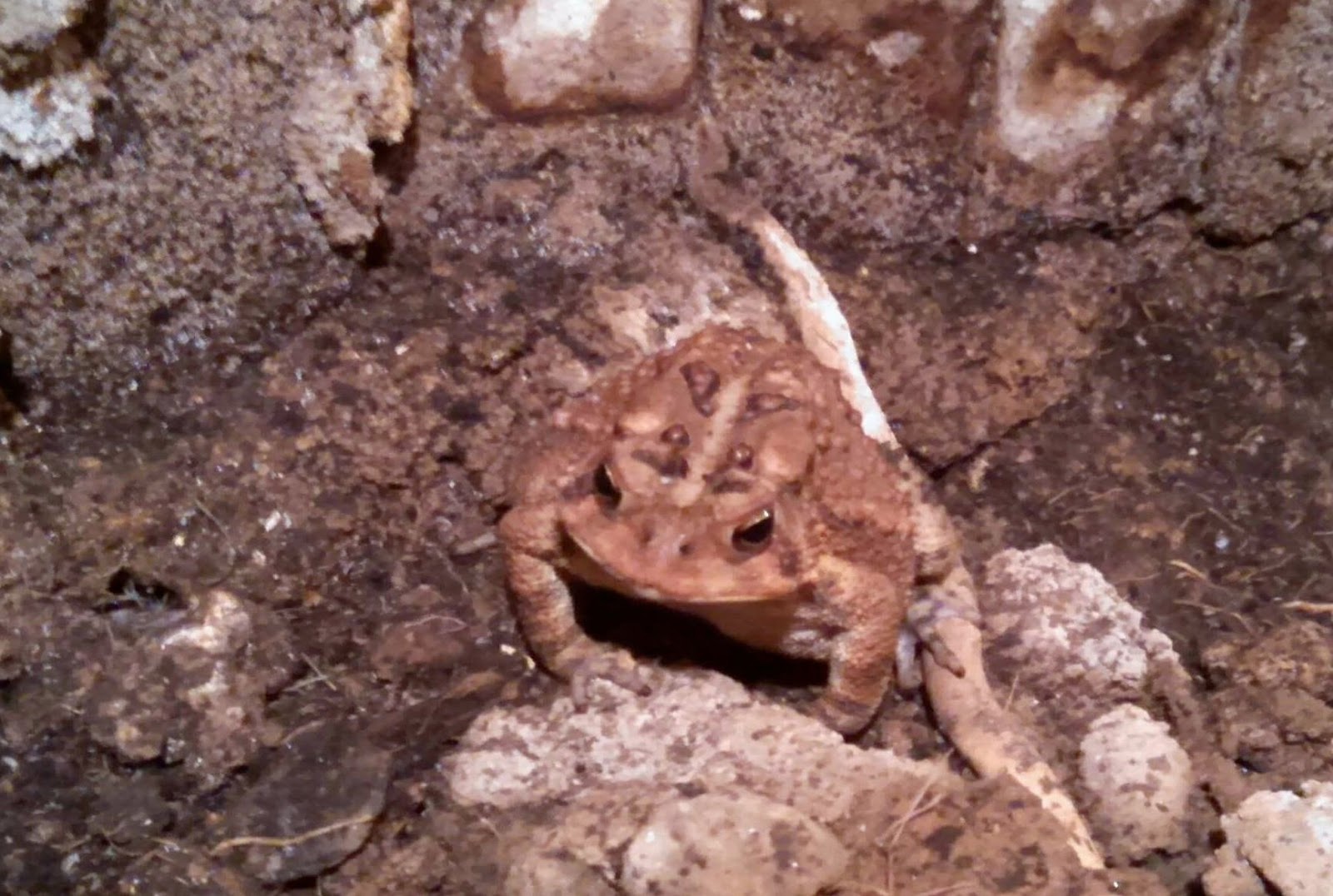 The bad news is that we found a snakeskin in the crawl space. The good news is we found a big, really big, fat toad living there. He sat at the entrance to his hole for three days and watched Bob work. By all appearances, he’s survived a long time, which gives me the idea the snake has shed and fled.

If you are a herpetologist who thinks otherwise, please don’t bother to enlighten me.

Since our daughter married a man with family in Peru, a trip to Machu Picchu has moved up on our bucket list.
Frankly, other than the ride up (which gets my heart beating to even think about) I was wondering how I would feel wandering around those Inca ruins. When we were in Guatemala, I was always aware of a strong spirit-world presence. I want to see Machu Picchu but I don’t want to pick up any spirit (demonic) hitchhikers. I know “Greater is He who is in me…” but it’s wise, I think, to be aware of realms we don’t tend to pay much attention to here. (But probably should.)

So imagine my delight when I came on this story in Don Richardson’s book, Eternity in their Hearts.

In the 1400s, Inca ruler Pachacuti rebuilt the city of Cuzco and refurbished the temple to their sun deity, Inti. He also built a series of fortresses, one being the majestic Machu Picchu, reportedly a place of refuge for the upper class. But, according to some hymns and traditions collected by a Spanish priest, Pachacuti later had a revelation of the One Creator God who had at one time been a part of the Inca tradition, but now had become a distant memory.

Supposedly, Pachacuti began to question the sun’s credentials as a deity: 1. He observed that the sun followed the same path and times, much like a laborer—never being at rest—never doing anything original or creative. And that it couldn’t be all-powerful if even a small cloud could dim its light. Nor could it be universal if it could only give light to some at one time but not to others.

According to the sources in Richardson’s book, Pachacuti remembered his father had said the Creator of all things had appeared to him in dream. This God was “ancient, remote, supreme, and uncreated. Nor did he need the gross satisfaction of a consort” (!)

Concluding this (Viracocha) was the one to be worshiped, Pachacuti faced the dilemma of how to tell his priests and populace they’d had it all wrong for centuries. A short-lived problem as the Inca Empire collapsed within the century. Nevertheless, a remnant had been seeded.

This story reminds me of the first six verses of Psalm 19, which address this witness in all creation—that no one has been left without his testimony.

The heavens declare the glory of God and the sky above proclaims his handiwork. Day to day pours out speech, and night to night reveals knowledge. There is no speech, nor are there words whose voice is not heard. Their voice goes out through all the earth, and their words to the end of the world.

So, I’m looking at Machu Picchu with new eyes because I know God’s footprints have been left behind, even on this remote mountain ridge. Glory!

BTW--Eternity in their Hearts is a great read and amazing testimony of God’s presence in cultures all over the world, and how he has prepared hearts to recognize his word when they receive it.

Now, the irony of all this thought about the sun and sun worshipers is that at this time of year, it doesn’t get in my house as directly as in the summer, so the dog and I follow the splashes of sunshine from window to window! I the course of this post, I’ve moved twice. Not a sun worshiper but do #needhousewithglassedsouthwall.

Blessings friends as we say farewell to October, bold, brassy, breezy and all things invigorating.