Having a Go at it Down Under 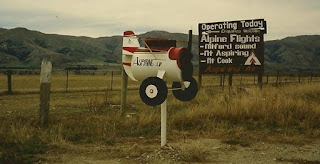 We get pretty used to safety measures in the US. Mind you, I am fond of guardrails on sharp curves, seat belts that jam rigid at the slightest sudden stop, and car bells that ding if grandma is about to back over the family cat. (To say nothing about my pride in having a son in Homeland Security, whose card with the shiny badge I keep right behind my driver's license.) But I have discovered such a dependence on things to keep my world secure can actually soften the nerves.

One of the things I enjoy about traveling to another country is the opportunity to see, when all the familiar is removed,  just how much I trust God with my life. We've had the good fortune to visit Australia once and New Zealand twice. (I was going to tell you why I love Quantas airlines, but since they're having a bit of engine trouble presently, I'll wait a day or two.)

The New Zealanders, in particular, are an adventurous sort. They first convinced the rest of us what fun it was to wrap an elastic around our ankles and get thrown off high places with their bungee-jumping prototype; they roll down hillsides inside padded balls, and scale glaciers. So when we signed up for a plane ride across the 12,000 foot mountain range to get to Milford Sound we expected a bit of an adventure, but when we arrived at the "airport" in the middle of a field, my sense of fun turned to fear. Didn't they know tourists expected something a little more officail looking?

My first concern was that I was taller than the plane. The pilot cheerfully herded all six of us inside, warned us it would be a bit noisy, and cleared the dirt runway. Within minutes, we were skimming glacier-topped mountains as far as the eye could see. I kept one eye glued to the pilot and the other fixed on the potential crash sites. Even though the plane coughed and sputtered , the pilot reamained unpertubed. Gaining confidence in his calm, I finally relaxed and enjoyed the spectacular ride.

I wasn't, however, expecting any adventure when we boarded our "real" airplne for our trip home. We departed from the south island for Aukland in the north where we would catch our overseas flight. In between the two points is the city of Wellington. The flight really wasn't scheduled to land there, but if the weather was good, apparently the pilots accomodated the passengers for Wellington by stopping on the fly-over rather than taking them all the way north and having them backtrack on the regularly scheduled run. A thoughtful gesture.

But the weather was terrible. We were socked in storm clouds which only seemed to quicken our pilot's sense of adventure. He announced in his sporting Kiwi accent,"Ladies and gentlemen, the visibiltiy is quite poor and they are having radar problems at the Wellington airport, but we are going to have a go at it and see what we can do." Bob and I looked at each other in disbelief as the plane banked, revved, and plowed through the dark clouds. After forever, it turned and began to ascend. My relief was short-lived as our undaunted pilot again came over the intercom with the news, "Ladies and gentlemen, as you could see we didn't make it, but we are going to have one more go at it. It may be a bit bumpy, so buckle up."

By now, I'm certain my next adventure will be experiencing my spirit depart from my body to meet the Lord. But after a noble effort, our pilot gave up and headed on. We returned home without incident only to discover we had won a trip back to New Zealand.

What is it about the human spirit that loves a thrill? Fears forgotten, I eagerly got out my travel guides and began to plan our next go at it.
at November 07, 2010