Bob’s Barn: When life hands you a carport—but you really wanted a workshop

I used to say the property we bought was “on the tracks”—the lake homes to the right of us were mostly a mix of new and nice, some to the left were tin and tacky. But after living here for the past six months, I’ve had to repent of my uppity attitude toward people who live in homes that are registered with the motor vehicle department. I still don’t appreciate those whose yards are full of trash; there’s a difference between slovenly and resourceful, but I’ve come to see that some of that yard stuff I looked upon as trash is actually someone’s creative vision just waiting to take form.

The property we bought came not only with an old mobile home, but also with a rusted metal shed tucked in the back corner and a steel carport that straddled the top of the driveway. After watching us haul everything from old skis to soggy boxes of dishes out of the shed, one of the tree-removal crew asked what we were going to do with the shed itself.

Although I was astounded anyone saw any value in what to my eyes was rusted wreckage, the man spent a Saturday, steadily unbolting, unscrewing and unhinging each section and stacking them on his trailer. By the end of the day termites on a woodpile couldn’t have done a cleaner job. Nothing remained but a few rickety pallets that had once been a floor and piles of all the stuff that we’d dragged under cover of the carport. 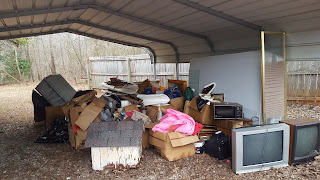 Bob walked around the now empty spot where the shed had been. Then he turned and pondered the carport, about twenty feet away. I could see it coming over him— That Look. That faraway but focused gaze that means he’s is seeing something I don’t see, something besides the object in front of us.

I suspected he was seeing his long-awaited workshop. Back there. On the shed-less spot.
Now I don’t think of myself as a glass-half-empty person, but I do like to consider the cons of a project, and the first problem (besides the fact the steel carport weighed hundreds of pounds) was whether it could clear the fence on one side and the trailer (which wasn’t yet demolished) on the other. And then, of course, there was the matter of just how the two of us were going to drag it back there anyway.

If Bob weren’t by nature an orderly person and if he weren’t married to me, I think he’d have a backyard stash of it’s-got-possibility junk because he certainly is enterprising. Looking around, he inventoried his resources: some semi-sound pallets, a crowbar, two small nylon ropes, a Toyota pickup and a wife. Not much better than two loaves and five fish, but look at what happened with them.

Having previously sheared off the tops of the two-foot lengths of rebar anchoring the bottom of the carport to the ground and prying it loose, he tied the ropes to the back of the truck.
Yup. I’m feeling a little red-necky about now.

Bob lifted a section of the carport with the crowbar and I rammed one of the repurposed pallets under it. Then I jumped in the truck, worked the clutch to inch the whole affair forward while Bob pushed the frame and kept an eye on the pallets. Every couple of feet, we’d stop and reposition the pallets, bring the back one forward, leap-frog manner, to make a platform for the frame to slide over.

Let me tell you, if this is how they hauled rocks for the pyramids, they’d still be building them today.  But as I’ve said before, determination and attitude are a DIYer’s  (Do-it-yourselfer, for those of you who don’t) most valuable assets. With a lot of grunt and grind, we dragged that carport to the back corner of the yard and joggled it into place.

I stood back to admire our labor. And that’s when I got it too—Bob’s vision. Instead of an old, ugly carport I could see Bob’s barn. Although the concrete floor was yet to come,
as were the sides, 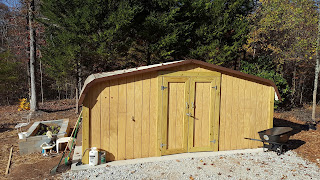 as far as we were concerned, the vision was firm as fact. And Bob would have his barn. 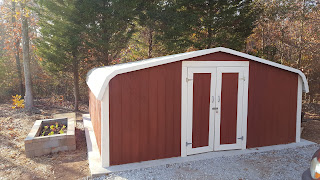 I love seeing possibilities where they don’t seem to be—whether it’s to repurpose and recycle something in my visible world or to cast my lot in with Him who gives life to the dead and calls into existence the things that do not exist--nothing is hopeless or impossible.