How to dismantle a mobile home—DIY Rule 1b:Beware the time-lapsed video 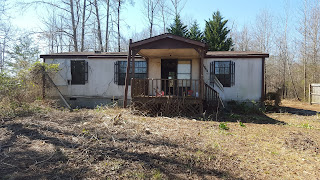 After we spent several thousand more than anticipated in clearing our newly purchased land, we discovered the old mobile home on it wasn’t so mobile after all. The person who wanted it for his own fixer-upper project abandoned the idea because he couldn’t get the permits to haul it down the road. So there we were with this big old doublewide parked right where we wanted to build. The man we hired to find the septic system offered to take it down. “$5,000,” he said. “You pick up the Dumpster fees.”

Ka-ching. Again. And we hadn’t even started to build. That’s the way it is, isn’t it? There’s always a high price to pay to get rid of the old before you can begin the new.


Not wanting to leak more money at this stage, we turned to that purveyor of information—Google. You know those sped up, time-lapsed YouTube videos that make everything look quick and easy—stir, whisk, beat, bang and voilà!—meals for a month, cakes modeled after the Eiffel Tower, backyard playhouses complete with gingerbread trim. Some of those videos should come with a warning: Undertaking this project could be hazardous to your health

Dustin’s mobile home demolition video quickened the DIYer spirit in us.
Dustin made it look easy, even possible, and for a lot less money. Bob and I watched him wipe that trailer from the face of the map in five time-lapsed YouTube minutes.

At the moment we weren’t thinking about the small print warning: Dustin is probably 20 years younger than you are. Dustin’s roof isn’t made up of gazillion layers of heavy shingle. Dustin’s mobile isn’t sitting on a permanent, concreted, cinder-block foundation.

Armed with sledgehammers, crowbars and enthusiasm, we set off one fine morning to knock out the interior walls. I understand why Chip Gaines (Fixer Upper) gets so excited about Demo-Day. Punching holes in walls, peeling strips of sheetrock, prying up nails that shriek as they let go, causing it all to tumble down, is one of those few activities where you’re rewarded with an immediate before and after—where you can see the possibility of making order from chaos and turning a vision into a reality.

However, reality is no time-lapsed video. Weight-bearing or not, studs don’t tumble like dominoes. For every five you knock down, forty more stare back at you. If I kept looking at how much lie ahead, I was going to be overwhelmed. It was time to slip into a telephone booth, put on my Myopic Mode Goggles and focus only on the task at hand.

Stud by stud. Room by room. Inside walls. Outside walls. Windows. The Dumpster overflowed with rubble like a bowl of over-microwaved oatmeal.

Ceiling. Toilets, sinks and rusty showers. Roof. Floor. Foundation. Weeks of tedious toil. Next to Bob, Perseverance and Endurance were my best friends.
Finally, we were down to the last obstacle before we could start building. And that’s when it kicked in—the peak-out point. It usually happens at the end of a project. I call it the Law of the Last. Just when you don’t have another driblet of energy, the last screw head strips, the last paper jams the copier, the last mile twists uphill, the last swing of the hammer smacks your finger.


We leaned against the truck and stared down the 30’-long rows of steel beams that needed to be cut and hauled away. It might as well have been the Titanic for all the energy we had left. You know when you can’t stand the thought of continuing on, but you’re in too far to go back, and you just want to pull the covers over your head and have a good cry? It was that point.

And then came the gift. Walking his dog up the driveway.

“Allen,” he said, offering his hand. Allen, it turns out, was the neighbor down the street with the back yard full of piles of wood and scrap metal. He pointed to our beams. “I have a saw to cut these,” he said. “I could give you a hand.” Bob recognized an enterprising spirit when he saw one. It didn’t matter what the value of spot steel was that day—Allen was welcome to it.

By the time we arrived the next morning, eight-foot lengths of steel stuck out from Allen’s trailer. Down the rows he went, slow and steady, sparks flying, saw screeching, steel beams disappearing.

A few days later we stood on the now leveled place. It had taken us the better part of a month, not exactly time-lapsed speed, but like the tortoise, we’d crossed the finish line. With hearts of thanksgiving we surveyed our accomplishment.

The old was gone, the new was yet to come.


In the joy of the Lord who makes all things new,

Email ThisBlogThis!Share to TwitterShare to FacebookShare to Pinterest
Labels: Chip Gaines, demolishing a mobile home, DIY, fixer-upper, Marcia Moston, the new is yet to come, the old is gone, time-lapsed video