When the fixer-upper is beyond fixing 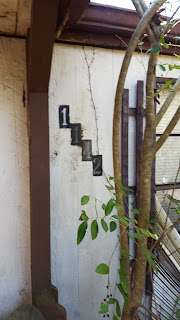 If dreams are any indication of what is occupying your subconscious, it wasn’t boding well for the situation my husband and I just gotten ourselves into. Zombies were chasing someone right up to my house—(the one we just bought in in real life.) I wasn’t particularly afraid of them but was holding the door open, hoping the person would make it in time.

Unfortunately I will never know because the scene switched to the basement of the dream place where we discovered a room that had been a gift shop. It was still full of stuff but someone told me that underneath the place were wind tunnels whose constant screeching drove people crazy. And I still wasn’t worried (?!)

Now the setup for this dream isn’t that far-fetched because the person whose real-time property we bought had just walked away. Family was concerned and came to get him. Left his beer can on the end table, bills piled high. Rusty Coleman stove on the kitchen counter and pictures on the wall. Said he didn’t want a thing.

When my realtor friend and I first walked through the place, we didn’t even have a flashlight (fine prepared prepper I am). The place was kind of creepy, but we had known we were going to tear it down. Still, when I got to the dark bedroom, I froze. The bedding had a big lump in it. 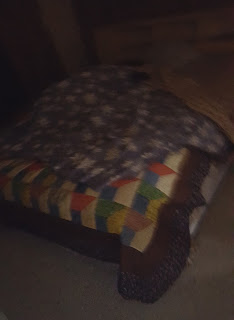 (Now, understand—when my elderly father-in-law lived with us I used to peek in his bedroom if he slept later than usual and look to see if his burrowed mound under the covers was moving up and down. (Breathe in. Breathe out.) So that’s what I did when I saw this lump. My realtor friend hollered out if anybody was there, but I told her if someone answered she’d better move cuz I’d be mowing her down to get out of there.

No one did but we got out fast anyway.

The decision to buy this place confirms an underlying dynamic between my husband and me. We can’t resist a mess, an adventure with a hoped for, but uncertain end. When we moved south eight years ago we said we were finished fixing up houses. Yes. We were going to buy a solid brick ranch, put the couch against the wall, the pots in the kitchen cupboard, clothes in the closet and move on with other things in life.

Many of you know how that turned out. How I was dazzled by a swimming pool and bought and hundred-year-old house with yellow duct tape holding up the doorsills. It took us a while (and tens of thousands of dollars) to recover from that decision. Never again a fixer-upper we said.

Well, that part is true. This place isn’t a fixer-upper. It’s so bad we have to tear it down before we can even build it up!  But I’m pretty sure this is the last one we buy, because we are at the point in life the Bible refers to as being “full of days,” and about out of energy to fix houses.

As it turns out one of my writing partners is an architect, so she is drawing up my plans. I sketched out the living areas and traffic flow I wanted and she is putting order to it. It’s good to know someone who can harness your nebulous ideas. I think every dive-in-and-doer should have a planner. So let’s see how this will all turn out. I’ll keep you posted as we pack up another person’s life to make way for our own.

Meanwhile, most of the words and blessings I’ve both received from others and meditated on myself this new year have concerned delighting in God’s favor and perceiving his pleasure. So in spite of what things look like at the moment, I’m thinking on Paul’s words as the ship was going down—So take heart men, for I have faith in God it will be exactly as I have told. But first we must run aground …

Email ThisBlogThis!Share to TwitterShare to FacebookShare to Pinterest
Labels: Fixer-uppers