The corner hoarders, creativity and Bob 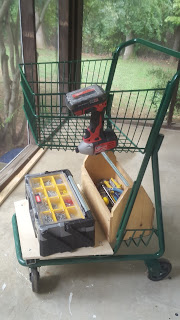 Have you ever noticed how so many houses on street corners belong to junk collectors? How you can be driving down a perfectly pleasant road, thinking to yourself, I wouldn’t mind living out here, and then you come to the house anchoring the corner. You know the place—the one with the bathtub and old tires and car hood from the 70s tossed alongside crumbling concrete lawn ornaments and tumbled over plastic swing sets. At first I thought this to be a phenomena of the countryside, but then I remembered George.

George had a sprawling corner lot in Islip Terrrace, a tidy neighborhood on Long Island. You had to walk by George’s fenced yard to get to the main street. Of course, you couldn’t help looking at the mounds of broken, rusting treasures George had somehow not only managed to find, but to haul back home. If George saw you looking over his fence, he’d yell and mutter something unintelligible, and chase you away. There’d be no coveting George’s precious possessions.

I am not a gatherer of the unnecessary, so when we moved to our own colonial on a corner in northwest Jersey, I had no reason to suspect we’d contribute to the corner collectors.
The former owners had left an old refrigerator in the garage. It was out of the way, so we just left it there, but one day, years later, when we decided to sell, I told Bob I was going to clean the garage. He followed me out and stood by the refrigerator, as though guarding an old friend. I opened the door. Inside was full, spilling over full with empty coffee cans.

“I like cans. You can put lots of things in them,” he said.

I looked around the garage. There were a few glass jars with screws, nails and electrical caps, but no cans. After a brief discussion about what the new buyers would think about inheriting a refrigerator full of cans, cans we were not going to pack and move, Bob reluctantly parted with his collection.

To his credit, Bob is incredibly clever when it comes to fixing things that seem to have no possible way of being repaired. It may mean that the clothes dryer sports a glass doorknob, but the door will work. When we were getting married, we had no money. Bob worked for weeks honing a thick brass nut into a wedding band. He was so proud when he showed it to me. I was mortified. Even though it was smooth and shiny and yellow, it weighed about half a pound—and was brass.

To this day, I regret not keeping it.

Nevertheless, when I saw Bob coming home recently with an old broken shopping cart, alarms went off. Homeless people haul their belongings around in shopping carts. Bob banged around out back for an afternoon and finally invited me to see his project: a cart to haul his work tools around the big commercial work sites he puts in the electrical for. Every week he adds something more to it—a fitted metal bottom for the top basket, a new coat of paint, some hooks (The picture above is the just the first stage of development). He said at first the guys at work goofed on him, but before the day’s end, everyone started putting their stuff on it.

The beauty of Bob is that he looks at things in new ways, and he isn’t embarrassed to do things differently. That’s one of the main lessons in all the books on creativity I have piled on my desk: be curious, look at things in unusual ways, and don’t let fear be death of an idea.

Maybe I should just take a lesson from Bob.

Blessings of joy in this glorious October here in SC,
Marcia
at October 22, 2015