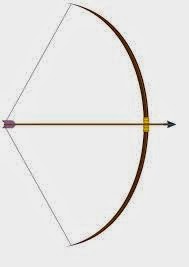 Although my only experiences with bows and arrows were from playing cowboys and Indians with our cap guns and string-strung sticks, I find the imagery to be a powerful spiritual metaphor.

I can almost see the arrows of prayer and purpose, and even attack, punching through the spiritual realm into the physical.  (Want to read how that imagery helped me to publish a book?)

According to the Dictionary of Biblical Imagery, this thinking is similar to the ancients’ prescientific worldview which recognized an unseen reality paralleling the visible one; a reality in which “a just person participated in spiritual warfare fought by greater powers with unseen weapons whose results spilled over into the visible universe.”*

(I didn’t think I had an ancient’s prescientific worldview—aren’t we fighting against unseen powers with spiritual weaponry whose results spill into our visible realm? Help me out here if you can.)

The Bible is rich with references to the arrow(s) of God, arrows of good and evil, and arrows of speech. According to the ancients, because of its swiftness and long range accuracy, the “bow and arrow was not only a weapon to be feared in the visible world but also the prime symbol of justice meted out.”—Dictionary of Biblical Imagery

Yes, the devil has his “fiery darts,” but God’s arrows are the ones to be feared. They always hit their mark. Always find the chink in the armor. “Thine arrows are sharp; The peoples fall under Thee; Thine arrows are in the heart of the King’s enemies”.—Psalm 45:5

And always win the victory, as Elisha told the king of Israel when he commanded him to open the window to the east and shoot “The LORD’s arrow of victory, the arrow of victory over Syria!”—2 Kings 13:17

But sometimes God’s arrows seem pointed at us, as Jeremiah laments:  “He has bent His bow and set me as the target for the arrow. He has made the arrows of His quiver to enter my inward parts . . . .I have forgotten happiness. . . .My strength has perished, and so has my hope from the LORD.”—Lamentations 3:12-18

That is about as depressed a state a person can sink to.

On those days when it feels like you hardly have enough strength to shoot a rubber-tipped toy arrow— Shoot! Shoot God’s arrow of victory at however tiny a piece of Truth you can recall and watch it stick—“The LORD’s lovingkindnesses indeed never cease, for His compassions never fail” Then shoot again: “Great is Thy faithfulness.” And again: (Oh, go for the whole chapter!—Lamentations 3: 21).

Remarkably, even though Jeremiah thinks he has lost hope, he musters up a sliver of truth. And then another. And it is enough to open the gates of hope and help him climb out of despair.

Thing is, God knows those times when we can’t even shoot our toy arrows, and arms others to shoot for us—to be “bows in the hands of God.”—Isaiah 49:2—which is what I set out to examine today, but I think I will think about that tomorrow.

For now, may you be encouraged that it is not our own bows that will save us (Psalm 44:6) but our being a bow in the hands of a God who cannot fail. "The LORD is my portion," says my soul, Therefore I have hope in Him."--Lamentations 3:24

Blessings this midweek of January 2014,
Marcia

Email ThisBlogThis!Share to TwitterShare to FacebookShare to Pinterest
Labels: arrows of faith, arrows of speech arrows of victory, Biblical imagery