When you think you have little to offer . . . offer it!

“When I grow up, I mean way, way up, I hope to be a wise old woman of God.” So says Carolyn Weber in Holy Is the Day: Living In the Gift of the Present.

She says a lot of beautiful wise things as she examines what it is to live Carpe Deum—seizing God by living the gift of the present. This is a beautiful book of poetry and pondering, gently crafted but deep-rooted in its challenge to live “in difference because we serve an extraordinary God.”  And I am pretty sure Carolyn Weber is well on her to becoming a wise (not yet old) woman of God.

I, myself am closing in on growing “way, way up,” and pray that being a wise woman of God accompanies the old part. Having started midlife with the Lord, I’ve had to dive deep and swim strong.

This past weekend, I attended Allume, a conference with about four hundred other women, most young enough to be my daughters: bloggers, mom entrepreneurs, ministry and mission minders, storytellers—all daughters of the King looking for ways to encourage one another in both craft and community.

There was a lot of wisdom being passed around and I gleaned several valuable insights. One thing that impressed me was the reminder that everyone—no matter how small—no matter how tied down with kidlings, or elderly parents, or a seeming lack of resources or skills, has something—some loaf or fish to offer to the Lord for his use. Yet how often we let competition or comparison or lack of confidence cripple us from even beginning.

Recently I saw a terrific quote (which I can’t track down and will do no justice to in my paraphrase) about thinking since we can only do a little, we don’t do anything at all. Isn’t that the truth—or rather the lie.

It was a lie that Asher Collie, a young woman I met at the conference, didn’t buy into. While watching  YouTube, she came across a video about the crippling effects of jiggers on children in Africa. The fleas burrow into the bare feet, suck the host’s blood, and form debilitating blisters and sores that cause infections, paralysis and even death.

Asher could have said, “How horrible,” and left it at that. But she didn’t. This “self-proclaimed shoe addict” enlisted a designer friend and together came up with a way to make shoes for kids an ocean away.

It’s an ingenuous idea: SOLE HOPE. Make the shoe uppers from recycled material such as jeans anywhere in the world, then ship the kits to Africa where they can be assembled by impoverished women and a shoemaker who attaches the rubber bottoms. 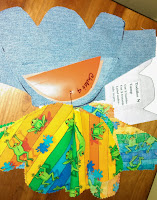 Love it! Kids get shoes; community gets employment. God gets glory.

You can have a shoemaking party anytime with the kits from Sole Hope. Check them out www.solehope.com

One other story that will cheer on any of you who have participated in or who think about participating in Operation Christmas Child with shoe boxgifts, involved a young man from Rwanda. He watched as his family was murdered in front of him. Sent to an orphanage, it was there he received a shoe box gift. He said he kept his comb for three years! And didn’t know what to do with a candy cane but was thrilled to find out.

Later, as a Christian (forgot how he came to the States) not only does he have an opportunity to go back to the same orphanage and deliver shoe box gifts, but he goes to the prison and extends forgiveness to the man who murdered his family. Wow.

If someone had thought they had so little to offer that they didn’t offer anything at all.

Like good stewards of the manifold grace of God, serve one another with whatever gift each of you has received.--1 Peter 4:10

Blessings friends as we journey on into that month of giving thanks--for Veterans, for bounty, for gifts graciously given.