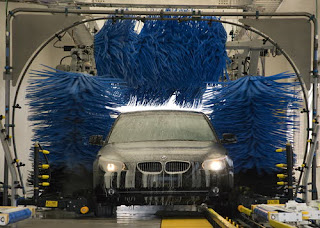 We are a cautious sort.  I suspect the fear of lawsuits from stupidity is the operating factor, nevertheless we are warned not to use a hair dryer in the shower, drink the recycled water from a toilet bowl, use the power drill for dental work, drive while the cardboard sun shield is in place, or consume a large soda because it contains an equally large amount of sugar.

But when it comes to the inherent dangers in car washing—at home, abroad, and in the auto-wash, the warnings are few.  Hence, I feel it incumbent upon me to offer a few precautions from personal experience.

DIY Washes: Safest
Having grown up in Vermont where five months of salted-road driving contributed to the pock-marked death of many a fine car, I learned early on to wash my vehicles—under the chassis, behind the wheel wells, and along the door frame. I favored the DIY washes where the only things you had to be careful about were not to blast yourself in the face with the wand or slip on the ice chunks that fell off the car.

But I avoided auto washes. They worried me. I wasn’t sure what went on inside there. It wasn’t until years later and another country when I went through one, that my suspicions were confirmed.

Foreign Auto-Washes: Industry Standards Questionable
Our Ford Explorer was choking with Guatemalan dust, so during a monthly supply run to the city we decided to wash the car. We were already on the conveyor when I saw that our side mirror looked as though it was going to get clipped. I rolled down my window to pull it in, but my husband and daughter started hollering and yelling to “get the window up, quick!”

I cranked it up just as the first burst of foam squirted through the opening.  Bob widened his eyes with one of those, “What are you doing? Car-washes-are-designed-to-do-this” looks just as the second arm rolled alongside and with a grand screech, ripped up the mirror.

Home hosing: Sunny Day Dangers
Although I had expected the perils involved in auto-washes, I was surprised to discover that home hosing methods also harbored dangers. When we moved to the South a few years ago, we bought a house, which was equipped with outside spouts and hoses, so we often washed the cars in the yard. That is, until one day last summer, our daughter, whom
I sure had never washed a car by herself in her life, decided to do hers.

The day was blistering. Her car was pointed westward, into the 90-something degree sun. She hosed it down and sudzed it up. A few minutes later she burst through the door, wailing. Apparently some days it’s just too hot to wash your car.

The windshield had cracked straight on down, from top to bottom.

The Auto-Wash: A Dance with a Dervish
And so, when we traded in my practical, efficient, but ugly, brown CRV for a black KIA Sorrento, and I vowed to take better care of it, I reconsidered the auto-wash.

It was the free vacuum service that wooed me in. I maneuvered the hairpin turn between the paybox and the entrance, sure that no one could possibly line up their car from that angle. The pan-face attendant kept waving me toward the right. My tires squealed with that rubbing sound only tires can make as they straddled the rail. Visions of the hundred-dollar wheel alignment I was going to need danced in my head.

Pan-face reassessed the situation. Back up, s-l-o-w-l-y, he said. We did it again.
Not wanting to look as though a woman my age had never gone through an auto-wash by herself, I glanced at the instruction board. Roll up your windows. Put it in neutral. Foot off the brake.  Everything in me wanted to slam on the brake, put it in park, and get out.

But the blue whirling, twirling dervishes had been summoned.

They sashayed, flipped, whipped, and danced right toward me. The bar sustaining them approached steadily at eye level. I tried to face it head on but the thought of decapitation in a car wash clashed with my more noble ideas of how to die.

I dove below the steering wheel and hoped there weren’t any cameras watching for just this sort of thing for a YouTube laugh.Finally, sensing the roller safely past, I squared myself properly upright, and drove out the exit.