Palm Trees, Preppers, and a Trip to Israel


The night we returned home from a weekend in Florida, I curled up on one end of the couch with my laptop and searched Pinellas County real estate for a pink stucco house, two palm trees in the yard, and an ocean sunset down the block.

My husband sat on the other end of the couch doing his surf the channels thing. Usually he’ll switch back and forth between boxing or football and some bizarre show, much to my annoyance.

But this night he didn’t.

I wish he had.

Because by the time we finished watching the show he settled on, my beach community fantasy had morphed into a nightmare of escape routes and desperate neighbors.

Doomsday Preppers will do that to you.

These people have done some serious preparation for disaster.  I read about a prepper who lives in northern Europe but has a bunker in South Africa. His contingency plan is to go by ship (his own fortified one) if a disaster occurs while he is in the north.

Although I’m not about to buy and bury a culvert to live in, I realize how woefully unprepared I am for long-term emergency living.

One survey reports that although 62% of Americans think there will be a major catastrophe within the next twenty years, 85% are not at all prepared. This sense that something is going to happen permeates the newsstands—magazines galore with end times prophecies and scenarios—Middle East upheavals and reconfigurations swelling around Israel.

So what to do? How much time and money do you spend preparing for the unknown?
How do you not worry about tomorrow but keep the oil in your lamp full and ready today?

Although I haven’t worked out the practicalities of what preparation looks like in my life, I have decided to be more intentional about listening to and waiting on the Lord about my plans.

He promises that although we make the plans, he directs our steps. And his ways are not driven by fear. This is something I was reminded of while reading Joel Rosenberg’s blog about whether or not to visit Israel in the coming days.

Rosenberg, a New York Times bestselling author, well informed and connected with the geopolitical scene and people of Israel, is the founder of the Joshua Fund, a humanitarian relief agency dedicated to “blessing poor and needy Jews, Muslims and Christians in the epicenter; in training and encouraging pastors and ministry leaders in the epicenter; and in educating and mobilizing Christians around the world to bless Israel and her neighbors in the name of our Lord Jesus Christ.”

Rosenberg encourages people to visit Israel (in particular with the Joshua Fund tour and epicenter conference) for several reasons: (Please see Joel C. Rosenberg’s Blog  for the rest of each reason)
1.
WE’RE LOOKING FOR PRAYER WARRIORS — The Lord commands us to pray for the peace of Jerusalem and we’re looking for people ready, willing and able to obey Him. On the tour and during the Epicenter Conference, we’re going to pray with and for Israelis and Palestinians, Jews and Muslims.
2.
WE WANT TO HELP YOU SHOW GOD’S LOVE TO ISRAEL IN A REAL AND PRACTICAL WAY — Much of the world ignores or criticizes or isolates or condemns the State of Israel. That’s why it’s vitally important that followers of Jesus Christ take the opposite approach. Let’s show the love of the Lord for both Jews and Arabs by touring Israel and serving the people there.
3.
WE WANT TO HELP YOU BECOME AN AMBASSADOR OF GOD’S LOVE FOR ISRAEL AND HER NEIGHBORS TO OTHER CHRISTIANS WHEN YOU RETURN HOME – By participating in this Joshua Fund tour and conference, you’ll get to see first hand why God loves Israel and her neighbors.

So what does this have to do with palm trees and preppers? It is all related to how I want to live. I had crossed off a trip to Israel out of fear of the times. Now, whether I go or not, will be a matter of prayer and trust, not debilitating fear.

Just a look at a map of the Middle East is a striking reminder of the power of the Almighty. Israel, a country so small that you could shoot a high-powered rifle across it at one point, is surrounded by twenty plus giant enemies. But God. . .

And the pink stucco and Gulf-side sunsets? They may have given way to a South Carolina garden plot and mountain view. Still thinking on that one.

I don’t know the extent my preparation for disaster will go, but of this I am sure: my obedience in the little things, the daily things today, prepares me to hear and know where to go tomorrow. If I walk close to Him today, I don’t have to fear where I will be tomorrow.

And what say you? These are certainly serious times. Any recommendations or words of encouragement? Anyone looking forward to a trip to Israel? 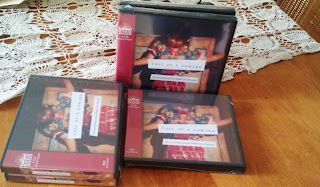 AND: Am giving away Max Lucado's, Grace and my own book as well as an audiobook. Blessings