No tail to wag, but lips to praise 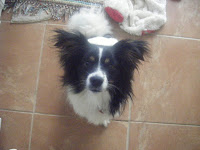 You can set up a murder, burn down the house, and lose a lover, but don’t kill the family pet, writers are advised. People are very touchy about their pooches and other furry or feathered friends.
I’m not here to defend lopsided values or recount the psychological and health benefits of canines and company, but I am going to confess that now I too, have crossed over to the dark side—uh—dog side, as a recent trip over the holiday revealed.
For years I resisted having any pet, especially canine, that depended on me for its survival. My main concern was that I wanted to be free to travel and not worry about what to do with Fido.
But a while back, our daughter came to visit with a puppy and then left several months later without it. The dog, undaunted by my lack of alpha mother spirit, followed me everywhere, snuggled as close as she could get, and made so much ado about my comings and goings that when we decided to take a trip over the holiday, I found myself fretting about boarding her.
“I think I’m becoming a doting old fogy,” I said to my husband, as I spread the dog’s new velour blanket over the sheets on his side of the bed. “You have to sleep on it tonight so it will smell like you and she won’t get lonely at the kennel.”
The next day after I packed our bags, I packed the doggie’s bag—blanket (now smelling like hubby) toy and treat. Although unnerved by all the canine chaos at the kennel, I quickly handed her over and left.
As we drove away, I thought about the things that endeared her to us. Although I suspected she’d probably leave me in a second for a squirrel, she certainly expressed enthusiasm and contentment to be in our company, and she loved to be touched and praised.
Don’t we all.
I reached over rubbed my husband’s neck. I may not have a tail to wag as he came in the door, but I probably could show a little more enthusiasm in welcoming him home.
A word of praise, a touch, an undistracted interest in someone’s conversation. A moment to just be content in another’s presence.
We humans have a way of making things overly complicated. I think I need to take a lesson from the pooch, who, by the way, did just fine at the kennel and is now snuggled up next to me as I write.
Others may not remember a word I say or thing I do, but they will remember how I made them feel. (A paraphrased statement credited to several people.)
Oh, Lord, may I love as you love me.
at November 28, 2011 5 comments:

Going to Jerusalem from my couch

Right now my sister, who usually calls me either at 8:15 on her way to work, or 5:15 on her way home, is in Jerusalem, which is not a phone call away on my particular plan.

I wish I were there too.
So what I’ve decided to do is follow her itinerary from the comfort of the sag in my leather couch. I’m using a beautiful book, Reflections of God’s Holy Land, written by Eva Marie Everson and Miriam Feinberg Vamosh to help me absorb the sights and history as my mind fills in the sounds and emotions.
Today was our first day in Jerusalem.  But I didn’t get very far. My tour group left me at the Pinnacle of the Temple of Herod the Great. As I looked at the picture of the massive edifice towering over the Kidron Valley, I was overcome with sadness.
Maybe it was the history that exuded from the sheer massiveness of the stones, the thought of the millions of pilgrims drawn, over thousands over years, to this place hardly larger than the state of New Jersey.  Maybe it was an awareness of the presence of good and evil, God and devil, both in times past and times to come. Or maybe it was just my own heart longing for clearer perception of God.
One thing is clear. This is no common place. This is God’s Holy Land.
It is so mind boggling to look at a map of the Mideast and see the “David” with its population less than that of Manhattan, surrounded by the “Goliaths.” Can there be any doubt that Israel’s very presence is nothing short of God’s providence?
We are told there is yet to come another time when “Goliath” will threaten and wreak carnage. A time of great sadness and seeming defeat.
But in the end, the conclusion will be as it was, and David’s words will once more ring out across the plain—“You come to me with a sword, a spear, and a javelin, but I come to you in the name of the [living God] the God of the armies of Israel whom you have taunted.”
***
And in that day His feet will stand on the Mount of Olives, which is in front of Jerusalem on the east; and the Mount of Olives will be split in its middle from east to west by a very large valley, so that half of the mountain will move toward the north and the other half toward the south. Zech 14:4
And the LORD will be king over all the earth; in that day the LORD will be {the only} one, and His name {the only} one. –Zech 14:9
Hallelujah!

And if that doesn’t happen by tomorrow, maybe I’ll get catch up with her tour.
at November 18, 2011 1 comment:

It was a small country church in northwestern New Jersey—tiny, by Southern church standards, but the clanging Sunday morning bell did manage to rouse forty or fifty of the faithful. Wednesday night prayer was another matter altogether. Only a handful of die-hard believers showed up for that.
On one such night, I had a sudden specific impression to pray that someone, someone in need, would pass by on that lonely stretch of road, see a light on in the church and come in.
A few weeks later, as the usual few of us gathered, the church door opened. I turned to see a tall, thin, slightly scruffy man and equally disheveled young woman come up the aisle. In an instant, I knew two things about him.
He was the answer to my prayer, and he had AIDS.
Of course they sat in the pew right behind me, confirming what I already knew—the Lord expected my husband and I to be a part of that answer to prayer.
His name was Roy. A life of drugs had landed him on the streets of New York, but now, through the ministry of David Wilkerson, he had turned to the Lord. Acting on his measure of faith, he had rescued his companion from the streets and brought her to seek refuge at a relative’s house.
They had seen the light on in the church and came for prayer and for help. He immediately told me his bare naked story; including the fact he had a lump in his neck. I asked him if he had AIDS. He was scared to take the test he said, but would.
The next week he called me to tell me the dreaded verdict.
Over the months Roy came and went between New York and New Jersey. Each time he came to town, he called. At the time I was skittish about his disease but knew it wouldn’t have mattered if he had leprosy—he was the one the Lord had sent in answer to my prayer.
One night we had just finished a steak dinner; my father-in-law was visiting and had gone into the den with our daughter. For reasons unknown to me at the time, I had bought a lot of steak and had plenty left over. The doorbell rang.
There was Roy looking as proud as if he were about to introduce his fiancé. “Hi, I was in town with some friends. We’re headed back to the city, but I wanted them to meet you. They all have AIDS too.”
I wish I could say my heart was entirely without fear or dread, nevertheless, hoping my father-in-law was content with the TV and the dishwasher full of hot water, we welcomed Roy and friends for steak dinner.
The last time we saw Roy, we hugged and kissed. “You know, I used to want God for what He could give me. But now I just want Him for Himself,” he said with tears in his eyes.
The phone rang one afternoon some months later.“I’m not well. I wanted to say goodbye.” Sadness filled the phone wires as I told him I loved him.
God sure has a way of turning our prayers upside down.
In the beginning, we thought we were the answer to Roy’s need, but in the end, he was the one who blessed us.
at November 11, 2011 3 comments:

Hanging On and Letting Go

Her frail frame defies the strength of her will. A will hued out of years of tenacious refusal to let the fractures in her life shatter into a thousand broken pieces.

But now with the husband gone and the children grown, her body, stiff and hard, gives in to the insidious invader that travels its pathways unhindered and sets up outposts, first in her back and now in her brain.
She’s still funny, this woman who used to fill my mind with stories of kings and queens and ancient mariners, who built real domed igloos out of blocks of frozen snow and taught us to find the reclusive jack-in-the-pulpit in early spring.
We laugh as I threaten to pop a wheelie with her wheelchair as we head toward the door marked Pet Scan. Although a grandmother myself, I say, “Ah, Mommy, my pet, now we’re all going to know what you’re made of.”
My sister Jan, who takes care of our mother, had been telling me about mom’s sudden and rapid descent into disconnect, but I couldn’t imagine the woman I had seen just weeks before could be that bad.
“Well, for example,” Jan said, “I told her she was too close to the edge of the bed, so she rolled over on her side, and then stopped and looked at me and asked, “Did you just give me a suppository?”
We laughed and laughed and then we sighed.
During the night I heard voices.  Jan, who was not feeling well herself, said, “Mom’s crying.”
Shaking off my sleep, I entered her room. Frustrated between hanging on and letting go, she obsessed about the items on her nightstand: glasses, pills, flashlight and a paper with the name of the kind bereavement counselor—the last representatives over which she had control.
I crawled into bed, wrapped my arms around her and talked about fun memories and the stinky things of life and hope in the Lord. On her wall facing us next to a picture of her and her parents is a picture of Jesus.
As I prayed over her, I saw her in heaven, her outer shell cracking and hurling off in fragments as her new body emerged full and ripe with the creativity to paint and express beauty and let go of hanging on.
Later I tell her the image. She “sees” it, her eyes open wide. “Yes!” she says and falls asleep.
at November 01, 2011 11 comments: