Downsizing: Letting go of all that Precious Stuff 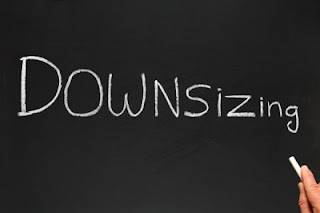 The thing about my childhood home was that even though it was small—with every closet and cupboard packed—to a child there was a potential for the discovery of unexpected treasures.

I remember the pantry, long and deep, with a wall of upper cabinets and huge heavy bottom drawers I could hardly joggle back into place. Nevertheless, I loved to explore and organize the shelves. I marveled over the ruby-colored dessert cups that caught shafts of light and the stacks of Grandma’s green embossed dishes crammed alongside rougher items like waffle irons, hammers and a gun or two lodged up against the water heater in the far corner.

Why did no one care that these treasures were relegated to such an ignominious fate? Hidden away. Unused. Unappreciated.

I think it was the discovery of my sister’s coconut that shed some light on the matter for me.

My older sister had gone off in search of her fame and fortune—or, more likely, her husband—when I decided to clean out the closet we had shared for years. I pulled down a box she’d left behind and peered in. The crude grin of a monkey carved from a coconut shell leered at me. Hard candle wax dripped down its head. Long, molding, stringy hairs fuzzed the sides. The remnants of a withered corsage and fake-flower lei collared its base like a burial wreath.

What prom date—what stolen kiss or intrepid touch had caused her to pack away this garish Hawaiian-themed prom memento? What touching memory did she hope to linger over at some future time?

And how long was my mother going to put up with storing her grown children’s left-behind stuff?

Stuff. Whether it’s your kids’ or your own, if it’s in a box or packed in an attic or closet, it’s stuff. As long as you have the room and aren’t planning on moving or aging, stuff is no problem. But sooner or later, the Second Law of Thermodynamics kicks in and like everything else, stuff starts falling apart. You can toss it. Try to pass it on to the kids (who may not actually be interested in grandma’s thick-legged table or pink carnival dishes.) Or you can face it head on with the grim determination of the Terminator and decide to jettison The Stuff.

The latter is easier if you are not much of a collector to begin with. But if you are inclined to hold on to every ball of yarn, every book you’ve ever read and every cutesy craft project your kids made—including the plaster of Paris handprint from your 40-year-old’s first-grade, then this downsizing is going to be painful business.

You could, (as my coconut saving, you-never-know-when-you’re-going-to-want-this sister did years later when she moved from a rambling Victorian to a small condo) invite a ruthless non-collector sister or friend to help you sort and toss.

Or, you could begin ahead of time and play the make-three-piles game: I love it, I’m not sure, I definitely don’t want/need it. This is a useful approach because items can migrate from one pile to another, and the process can be repeated as each layer is shuttled off to the local ministry thrift shop.

I’ve moved a lot and I’m not a collector. Still, each move has required a shedding of sorts to accommodate not only my new physical surroundings, but also the identity I’ve imagined for that time and place.

When my husband, daughter and I drove from New Jersey to Guatemala, I allowed us each one trunk of precious possessions. Besides some necessary household items I didn’t think I could find there, I chose my mother’s crocheted table runner, a small vase, and a few pictures. I wanted to be able to open my bag and create a spot of instant beauty in my adobe house. 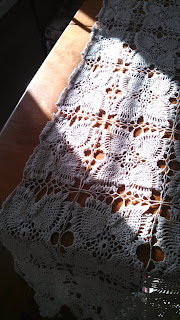 The house we just built is about 800 square feet smaller than our previous one. Do you have any idea how much stuff you can fit in that space! Unsentimental as I am,  downsizing is difficult. It still was hard to decide what was important. But at this stage of my life I knew I wanted less—less to clean, less to remember where it is, less to leave for my kids to deal with.

I decided beauty is important to me. So is efficiency. Form and function. Keeping the vision of clean white walls and uncluttered spaces before me, I grew my give-away mound to painful proportions. (Donating a lot to the local ministry thrift eased some of the pain, as did giving my daughter the wooden crate full of her wooden blocks I’d held onto for thirty years.) 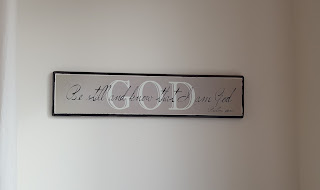 Full disclosure: I still have some of Grandma’s green embossed dishes and Mom’s crocheted table runner. 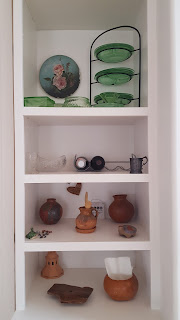 And blessings with deciding on your Stuff,

Email ThisBlogThis!Share to TwitterShare to FacebookShare to Pinterest
Labels: downsizing, how to downsize, marciamoston, stuff